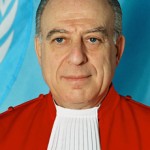 Judge Pocar has a long-standing experience in UN activities, in particular in the field of human rights and humanitarian law. He has served for 16 years (1984-2000) as a member of the Human Rights Committee under the International Covenant on Civil and Political Rights and has been its Chairman (1991-92) and Rapporteur (1989-90). Further, he was appointed Special Representative of the UN High Commissioner for Human Rights for visits to Chechnya and the Russian Federation during the 1995-6 conflict.

He has also chaired the informal working group that drafted, within the Commission on Human Rights, the Declaration on the rights of people belonging to national or ethnic, religious, or linguistic minorities, which was adopted in 1992 by the General Assembly. He has also been for a decade the Italian delegate to the Committee on the Peaceful Uses of Outer Space and its Legal Subcommittee.

- International Criminal Justice at a Crossroad

- Lights and Shadows in the Recent Development of International Criminal Law